In honor of Canada Day 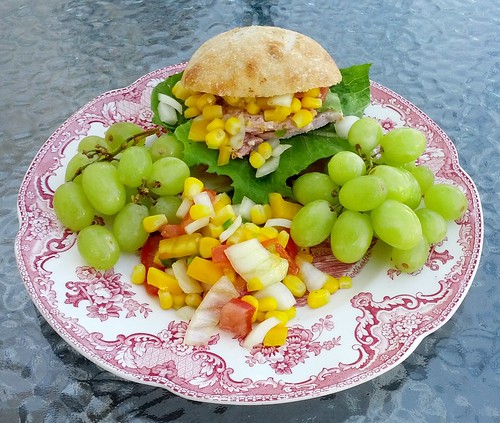 Let’s talk about dinner. A friend gave me a bunch of her old Food & Drink magazines, which is apparently made by the LCBO (the Liquor Control Board of Ontario) and is FREE to people shopping in the LCBO stores. Anyhow, I’m leafing through the Summer 2011 issue and I came across a recipe for “Peameal Bacon on a Bun.”

There are basically 2 parts to this.

You chop the veggies up (next time I will add more tomato and less onion. I’m also thinking a little lemon juice might brighten up the flavor). Then you add the other stuff and stir till combined.

Now you take 4 buns or rolls. The recipe calls for kaisers, but I went with ciabatta rolls. Slice those up.

Take 4 slices of peameal bacon and cook it (if it’s fully cooked, great, you just want to warm it through). After one side is done (1-3 minutes???), coat with some of the bourbon mustard mixture, and flip it.

Put more bourbon mustard on each roll. Add a couple of lettuce leaves, the bacon and some of the corn relish. I added it as a side too. And you’re done. Easy peasy.

Original recipe can be found here. Probably simplest to do a search on summer 2011 and look for “Peameal Bacon on a Bun.”

Comments Off on In honor of Canada Day

Let us speak of heaven

I love poached eggs. I really do, but they’ve always defeated me in the past.

A coworker sent me this video from Lifehacker. The basic premise is that you put the raw egg in a fine mesh strainer, let the thin white run out and then lower them into the water. The guy swears by new eggs, but I achieved these with eggs that were on the older side.

Pay attention to the instructions about water temperature. The other thing I would say is that timing is everything. I recommend making sure everything is else is done.

Comments Off on Let us speak of heaven